Curious to learn more about Korean tea we start into the day. Korea is known as a relatively young tea producing country… but it has a long history. Aldready in the 7th century Buddhist monks brought tea plants do Korea and started cultivating tea. In the 14th century with the political change to Confucianism, Buddhism was banned and temples and also tea plantations were abandoned and some destroyed. Just in the time after independence in 1945 koreans started cultivating tea again. In the South of Korean mainland some of the old plantations managed to be reactivated and today Korean tea culture is getting stronger and stronger. 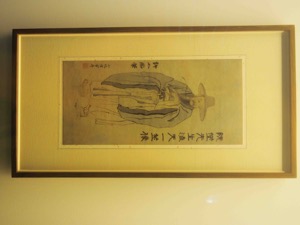 Mr. Moon from the Osulloc Tea company picks us up and explains that Seo Seong-Hwan already in 1979 started to plant tea in bigger scale on the mainland and on Jeju Island, which is considered to have the most favourable climate for tea in Korea. In the 1960s Seo Seong-Hwan had travelled a lot in Asia where he saw the rich and deeply rooted tea cultures. With the vision to reactivate Korean tea culture he looked out for the best place to plant tea. Jeju Island has a rich volcanic soil and a subtropical climate. As it is an island it also has the advantage to be away from any pollution. To start to plant tea at Jeju Island must have been hard, as there was not even electricity on the island by that time. In the Osulloc Museum, which is visited by almost 1,5 million people per year, we find a book in the life of Seo Seong-Hwan, who must have been a visionary. 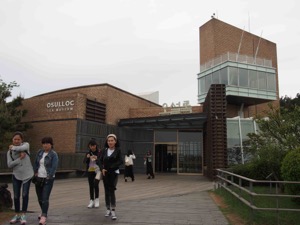 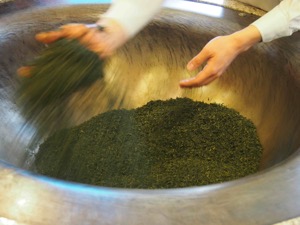 In the museu we can see tea production by hand in a fired pan. A closer look to the teas shows that most of the pure teas are green, some vaporized, some produced dry or how the Koreans call it: roasted. There is also a great range of flavoured teas and Mr. Moon explains us, that at the moment it is a bit fashion in Korea to drink flavoured teas. Like us he sees this development very critical and tries to convince people to stay or go back to the pure teas. Then he invites us to with him to the Tea Stone, which is a beautiful building integrated very well in a forest like surrounding. The inspiration for its architecture was the very typical Asian ink stones, which were used to grind ink before mixing it with water. 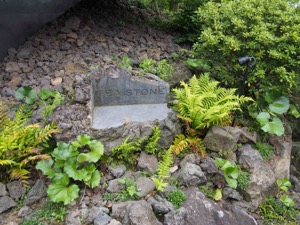 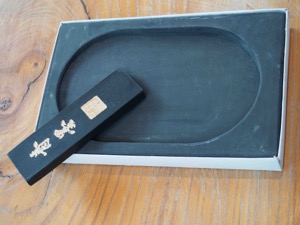 Everywhere we can see, that somebody with great care fore architecture has planned all the buildings, most designed by famous Korean architects, but there is one of Portuguese origin. The headquarter building in Seoul, which not just includes the tea branch, but also a very strong cosmetic branch, was designed by the Alvaro Siza Vieira. The chairman Seo Kyung-Bae, who has a great passion for architecture and design, invited the famous Portuguese Pritzker Architect to realize that building in Seoul. 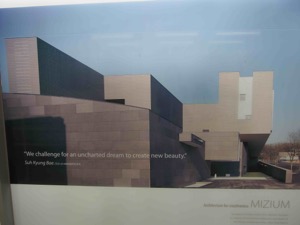 Back in the Tea Stone, we are gently invited to have a tea master class. The material used in the interior all is natural and the atmosphere is calm and concentrated. The big windows show a beautiful view on the garden. Everything is well prepared for the tasting and we are invited to prepare the teas ourselves. It is easy to see the difference as the steamed teas have the typical Japanese needle shape and smell of seaweeds. Osulloc has planted a big quantity of the Japanese variety Yabukita and also uses a lot of Japanese tea production machines. The other green tea is more curled as is not steamed and also lacks the last machine, which makes the leaves needle shape. It tastes also fresh, but more intense than a steamed tea. 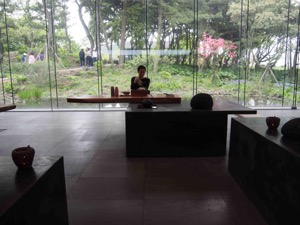 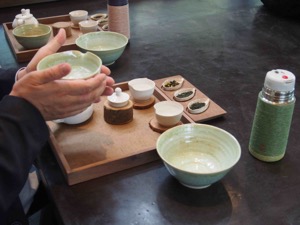 Osulloc all together has 300 hectars of teagardens: more or less half on the Korean mainland, half on Jeju Island. On the island there is three plantations. Dosun, which by coincidence we have visited yesterday, is the oldest. It is considered the plantation with the most Japanese like tea. Most tea plants are Yabukita and the teas have a nice green colour and fresh umami taste. Close by the Tea Museum there is the Seo-Kwang teagarden, where green tea and also a little amount of black tea is produced. 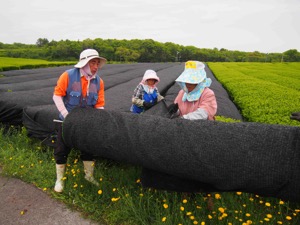 As at the Dosun plantation a lot of the tea is shaded with the black nets, we know from Japan. Mr. Lee who is in charge for the production explains us that about 60% of the teas are shaded for getting finer teas. The shading time is surprisingly long with three weeks as we know it from Gyokuro production. The very first picking for the supreme Master’s Tea is done by hand as well as the production in a fired pan. Approximately 400 kilogram Master’s Tea are created every year, while Osulloc has a yearly production of 600 tons. 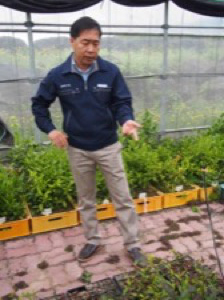 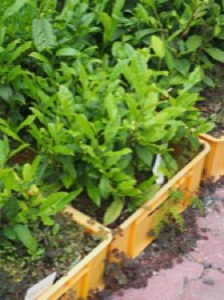 Than Mr. Lee shows us the tea plant nursery, where he is experimenting with new varieties. From the remains of old Korean tea plants they managed to create new plants, which they already have planted also at the Seo Kwang tea garden. As the tea bushes, which normally are created out of cuttings, get week when they are about 40 years old, he already has to think about when and how to start replant tea plantations in the future. Together we have a look at a two years old tea field, which is not looking to happy. Mr. Lee explains that Jeju Island has more difficulties with frost than for example Japan. Therefore they have also installed the Japanese style ventilators for blowing away cool air when there is risk of frost. But sometimes that is not enough. Therefore all the tea fields have water sprinklers, which not just help out in dry times, but also help to fight frost. 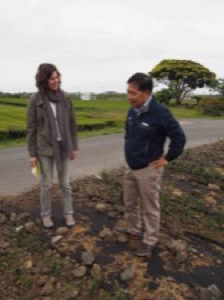 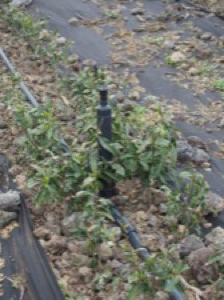 Finally Mr. Moon invites us to go again to the Dosun Tea Plantation, where we try the tea produced yesterday. It is not yet final heated and therefore very delicate and elegant. We are very happy that we can take with us samples of this freshly made tea for a special tea tasting we plan to give when we are back in Porto. 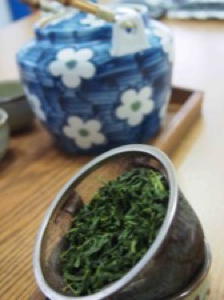 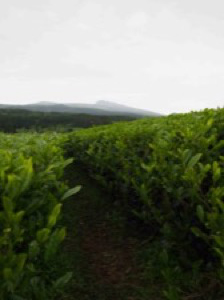