In 2008 Henrique Manso and Rosário Martins decided to live in the countryside and so they left Lisbon and moved near to Castelo Branco and dedicated themselves to growing aromatic herbs. Henrique thus returned to the birth place of his parents – the Beira region in central Portugal. The couple purchased an 8 hectare plot of land and now they grow herbs and edible flowers for herbal teas on about 2 hectares of the plot. As they had decided to opt for a healthier lifestyle for themselves and their children, it was a natural move to decide to work their land organically. In addition to the herbal teas such as lemongrass, peppermint and lemon balm, Rosário started to develop interesting blends of herbs and flowers, which are intriguing, not only because of the complexity of their aromas but also because of their beauty. 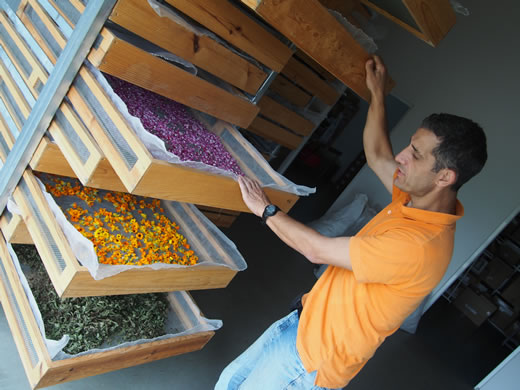 Chá Camélia quickly became convinced of the high quality of the organic herbs and flowers produced by Henrique and Rosário. In the Chá Príncipe tea, Henrique and Rosário’s lemongrass adds the citrus aromas to the Japanese green tea of ​​the Morimotos. Thus, this tea with a Portuguese touch merges East with West.