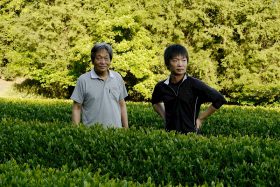 The traditional Kamairicha tea garden of father and son Kadota is located in Miyazaki prefecture, on the southernmost of the Japanese main island. The friendship with the neighboring organic tea garden of Morimoto family already exists since many decades, and has an ongoing influence on the history of Kadota’s manufacture of Kamairicha.

Kadota’s tea garden parcels are really small compared to others of today’s tea gardens. The total area of Kadota’s tea garden is around 2,6 hectare. Many steps of Kadota’s traditional Kamairicha-manufacture are done by hand. Because of this reason, the manufactre of more leaves harvested from a bigger tea garden area would just be impossible. Even with the really small area of their tea garden, Kadota have to work in fact day and night to process the freshly harvested leaves during the first-flush-season. While Junji Kadota works during daytime, his son Yusuke does the night shift, or the other way round. With the historic utensils for their Kamairicha manufacture, Kadota have to work like this several weeks, until all the first-flush leaves have been produced.

Also father and son Kadota consider the kind of historic Kamairicha manufacture, like it takes place here, as a precisous treasure, because meanwhile it is unique in Japan. The highlight of Kadota’s Kamairi manufacture are 100 years old Hon-Gama (“realy Kama”), of which three pieces stem from Shigeru Morimoto’s father Ryotaro Morimoto. Ryotaro Morimoto ended the manufacture of Kamairicha many decades ago, when he started with the production of steamed teas. At this point of time, Ryotaro Morimoto gave his Hon-Gama to his neighbor and friend, namely Junji Kadota’s father. In the mid of the 20th century, the Hon-Gama were still fired with wood. Though, the smoke of the fire caused problems sometimes during the Kamairicha manufacture, as well as because it was not easy to get the right wood for firing them, Junji and Yuske Kadota stopped using wood for the Hon-Gama. Nowadays, they use a gas flame for heating all of thei old Kama. This is the only thing they changed in their factory.